I guess, by some strange act of fate, that my finally watching 2011 hot topic The Ides of March was well timed. The film, which distributing company Sony initially had scheduled for limited release in December and then wide release in January 2012, saw these dates pushed up a few times until Sony settled on an October 7th 2011 release date. There’s no doubt that Sony’s desire to get The Ides of March‘s out into wide release a soon as possible was a result of the generally positive reception the film received from its summer screenings in both the Venice International Film Festival and the Toronto International Film Festival. Typically, a political thriller wouldn’t be pegged as block buster material but seeing as the film was directed by and starring George Clooney, Ryan Gosling, Evan Rachael Wood, Philip Seymour Hoffman, and Paul Giamatt ,The Ides of March packs a serious wallop for a film with a rather familiar story.
The Ides of March is all about political fledgling Stephen Meyers (Ryan Gosling) who as the deputy campaign manager of ideal presidential candidate governor Michael Morris’ (George Clooney) gets a rough immersion  into the realities that unfortunately underlay even the most progressive and seemingly good willed political agenda. In the process of cleaning up one of the Governor’s messes, Meyers finds him playing for his life on the giant chess board that is a presidential campaign and has to eventually to make a tough decision between his integrity and his will to survive in the greasy world of backstage politics.
The reason I liked The Ides of March is because its message is not lost in its quick shuffle of political jargon and creeping sense of paranoia that has you, like Meyers, frequently guessing at the cause, act, and result of every characters’ decisions. Instead, The Ides of March carries a swift ideology, that only echoes louder and louder throughout the film. This would be that a life in politics is only successful if one can sharpen and execute all opponents with incredibly adept ruthlessness, cunning, and even sacrifice one’s own integrity. What must be understood is that Meyers, now 30 years old, still handles himself on the youthful periphery of the cut throat world that others like his boss and mentor Paul Zara (Philip Seymour Hoffman) and Morris glide through everyday. Once Meyer begins to play ball at the level of the politico big wigs, black mailing and playing ‘the game’, it is only then that this restless realm of slander and damage control sensibilities becomes accessible to Meyers. Meyers eventually undergoes a tough, to say the least, transformation into political manhood which is not exacted without taking its toll on Meyer’s once optimistic and generally more playful politic demeanor.
If you don’t know what I mean, I won’t ruin the end of the film for you, but the similarity between The Ides of March‘s grand finale and this icon image should give you some indication of what I mean: 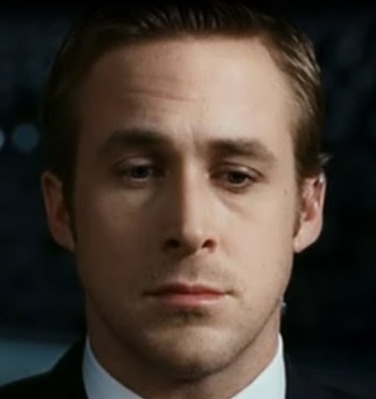